This feature was originally published in November 2013. Don’t think much has changed since!

nos·tal·gia noun [no-stal-juh, -jee-uh, nuh-] : pleasure and sadness that is caused by remembering something from the past and wishing that you could experience it again.

Rob Sheffield once compared music to a time machine. Songs remind us of times in our lives, and familiar sounds trigger familiar images in our heads. Subconsciously, the music attaches itself to the context in which it was experienced most intensely, and by listening to it, we are taken back to that moment. Music and nostalgia are intertwined in this way.

Yet nostalgia is a universal human emotion, so we decided to flip the scenario. Instead of listing the songs we found nostalgic, what about compiling a list of songs that are nostalgic? Many songwriters have made a career off tales of troubled pasts and old girlfriends, but then there are those certain songs that epitomize the idea of nostalgia. Most of them are frankly very sad, as the past is always dotted with could’ves, should’ves, and would’ves, which are easy to dwell upon.

Some, however, reflect with resignation, accepting that one can’t change the things that’ve already happened. The 21 songs here depict 21 distinct ways of coping with, embracing, and analyzing the past. View this list less as a “best of” and more as a psychological breakdown of nostalgia in pop music.

Skid Row – “I Remember You” 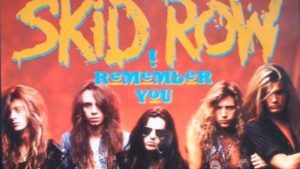 Guitarists hate chorus delay, and for good reason. The effect was ubiquitous throughout the 1980s: If you were recording a major label album, your guitars were slathered with warm, synthetic tones. The definition of dated, the chorus effect has a wondrous caveat, in that it instantly teleports you to the ’80s. I wasn’t even alive in that decade, and yet I suddenly become familiar with it via a song like Skid Row’s “I Remember You”. It’s one of the great power ballads of all time, following a vulnerable Sebastian Bach as he tries to shake the memory of a lost lover. His heartbroken sentiments are those of reflection; he acknowledges the end of the relationship, but won’t discard the experiences they shared together. He hopes she also keeps them: “I wanna hear you say, ‘I remember you.’ ” –Jon Hadusek

If anyone can glide frictionlessly across nine minutes of gentle memories, it’s Sam Beam. “Please remember me,” he begs some long-lost childhood friend turned lover, braiding fondly recalled days from his past together with images of angels, Heaven, and graffiti-spangled pearly gates. And really, in the world of this song, there’s no difference between eternal reward and the feeling you hunger for through your best memories. There’s no difference between watching a trapeze swinger flip toward the sky with the person you love the most and finally clawing up to the place you’re supposed to end up if you’re good. That’s the secret hope buried in nostalgia: the feeling that maybe, if you make it, you’ll finally get back to the warm places you remember. –Sasha Geffen

In contrast to most of the songs on this list, Bryan Adams’ mega-hit “Summer of ’69” looks back on better days with fondness rather than melancholy. His references to drive-ins and five-and-dime stores are sepia-toned and obvious, but they hit home for the twenty- and thirtysomethings listening to FM radio at the time. People related to this song… the tale of unrequited juvenile romance, the innocence of youth, and the pain of dwelling on such memories. When Adams concedes that “nothing can last forever,” he’s making that reconciliation for a whole generation of young adults. And it’s a universal message, because one can become lost in the present if they cling to the past. –Jon Hadusek

Like a roll call at the cemetery, “Names” beads together portraits of characters buried in time with nothing but sparse piano and Chan Marshall’s earthy voice. It’s one of the most subdued Cat Power songs, and until you listen to the lyrics, one of the calmest, too. But as soon Marshall fleshes out the vignettes of the people who touched her life throughout childhood, “Names” becomes anything but calming. She sings about friends forced into sex acts by strangers and family members, friends who started selling hard drugs at age 13, a teenage boyfriend who had to sell sex to support his crack habit after she moved away. “I don’t know where they are,” Marshall sings at the song’s finish, ringing her words with regret. She’ll never know if any of them made it. –Sasha Geffen

Gram Parsons wrote “Brass Buttons” about his mother, who died from an alcohol-related liver disease after a lengthy stint in the hospital. It’s suspected that Parsons’ stepdad gave her alcohol in the hospital, exacerbating the problem, but this was never proven. The song (included on Grievous Angel) was written prior to Parsons forming the International Submarine Band and touts some of the most aching, poetic lyrics he ever penned. Again, we find the songwriter citing distinct imagery as he waxes nostalgic: “Brass buttons, green silks, and silver shoes/ Warm evenings, pale mornings, bottle of blues.” –Jon Hadusek

Always curious about the ways technology might color sentiment, Grandaddy predicted an extremely specific brand of nostalgia on the second-to-last song of their breakout record, The Sophtware Slump. In 2000, Jason Lytle essentially described the feeling of peering through a satellite at your childhood home through Google Maps, only instead of a laptop, the titular character of “Miner at the Dial-A-View” visits a futurist facility capable of honing in on any spot on Earth in real time. He watches his old friends wander around his old haunts, completely severed from a life he remembers loving. Lytle’s mournful tone on the refrain “I’m going home someday” calls into question whether “home” is something that can even be returned to or whether it’s only a feeling frozen into the pixels of the Dial-A-View. –Sasha Geffen

15. Eleanor Friedberger – “Stare at the Sun”

Sometimes, when nostalgia hits you, the lines between “now” and “then” begin to blur. On the buoyant “Stare at the Sun” (from the appropriately titled Personal Record), Fiery Furnace Eleanor Friedberger evokes a seemingly inconsequential moment in the back of a cab, only to drift through other memories caught “in amber,” directly addressing an ex who may not exactly be an ex. Disconnected images of the past flare up (“Cooperative coffee and synchronized showers/ I try not to look at the clock”), eliciting warmth, confusion, hope, and sadness all at the same time, leaving Friedberger to repeat a mantra seemingly intended to keep from getting overwhelmed by it all: “I’m trying not to stare at the sun.” Nostalgia can give off some warmth, but it’s a dangerous thing to focus on exclusively. –Adam Kivel

“Am I asleep or awake?” Jenny Lewis asks as she matures out of childhood and into the present. She sees herself hitting a home run on the baseball field, smiling and rounding the bases with the kind of triumph that can make your whole week when you’re a kid. Then she’s climbing a mountain with a partner, then finally she’s waking up next to that same partner with that same good feeling of being Little League MVP. The song breaks out into the best kind of nostalgia—the one that’s triggered, unintentionally, by the situation that’s actually around you, the one you don’t have to reach too far to find. –Sasha Geffen

For Jeff Mangum, time seems like an easily manipulatable substance, same as light or water, something he can swirl or funnel at will. He strings Anne Frank to the present, and he shoots himself to the end of the world. But in the first few words of their epochal record In the Aeroplane Over the Sea, Neutral Milk Hotel ground us in a specific time: when you were young. It’s almost the same opening line as Pink Floyd’s Wish You Were Here, and it also guides us through an imaginative youth tainted by illness and dysfunction. We see towers and holy snakes commanded by the same tiny monarch, only to watch his parents eat each other alive. But at the center of the song, Mangum weaves in the memory of an intimacy too pure to be troubled by the violence around it: “This is the room one afternoon I knew I could love you/ and from above you how I sank into your soul/ into that secret place that no one dares to go.” –Sasha Geffen

Innocence is underrated. Too often it’s conflated with naivety and subsequently dismissed or derided. “We’re Going to Be Friends”, the elementary school acoustic ditty from The White Stripes’ breakthrough, 2001’s White Blood Cells, revels in innocence, when the biggest worry you might have had a teacher thinking that you sound funny. It’s arranged in a reflectively simple manner, something that the children depicted in the song’s schoolhouse could learn and play for each other. It’s sweet, warm, and human, three elements that are surprisingly difficult to pull off in a rock song, but work here to repaint your entire childhood in the rosiest of hues. –Chris Bosman

Childhood is bliss, truly. It’s the only time in our lives in which we’re free to think and create and have fun. In fact, “have fun” is the only real mandate; no money, romance, or careers holding us back. But it’s oh so fleeting, and that’s what affected Ray Davies the most. He wrote The Kinks Are the Village Green Preservation Society to both celebrate adolescence and examine the passage of time in Britain, imploring listeners to respect the past as it transforms into the future. With bright arrangements and instrumentation, the album’s opening track acts as a thesis statement, a charming ode to old British architecture and Donald Duck. To Davies, these were signposts of youth. –Jon Hadusek

This site uses Akismet to reduce spam. Learn how your comment data is processed.